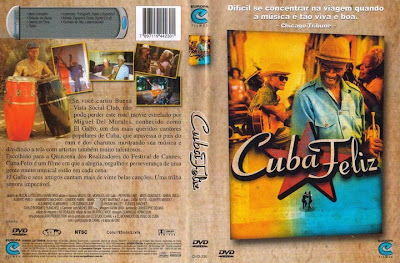 Album DVD :
Cuba Feliz بــهــجــة كــوبـَــا
♪
Directors :
Karim Dridi كــريم الــدريــدي
♪
Writers : Karim Dridi, Pascal Letellier
♪
Actors :
Miguel Del Morales, Pepín Vaillant, Mirta Gonzáles, Aníbal Ávila, Alberto Pablo ...
♪
Producers : Alain Rozanès, Jacques Debs, Pascal Verroust
♪
Language : Spanish - French
♪
Index :
http://www.cubamusic.com/
http://en.wikipedia.org/wiki/Music_of_Cuba
♪
Note :
This is a joyful and uninhibited journey into Cuba’s musical soul. The film follows Miguel del Morales, a 76 year-old troubadour known as El Gallo (The Rooster) as he wanders the country meeting people of all persuasions who share the passion of music that is central to the life and dreams of the Cuban People. Cuba Feliz was an official selection at the Cannes Film Festival
The title CUBA FELIZ is taken from a song by Armandito Machado, one of 22 in the film, nearly all of which are sung by Miguel Del Morales, better known as El Gallo ("the rooster"). Originally, director Karim Dridi planned to use Del Morales only for two or three days of shooting in Cienfuegos and Trinidad. However, the 76-year-old vagabond-troubadour proved to be such an asset - he knows scores of Cuban songs and sings them with a lilt in his voice that speaks of joy and suffering - that Dridi and his screenwriter Pascal Letellier, a noted authority on Cuban music, decided to take him with them on this "road movie musical" across the length and breadth of Cuba.
.
♪
╔══╗
♪♪
║██║
║♪♪║♥ ♪ Download From Here. [1Go 135 Mo] ♪
╚══╝
♪
.
Posted by Abdel at 21:07:00