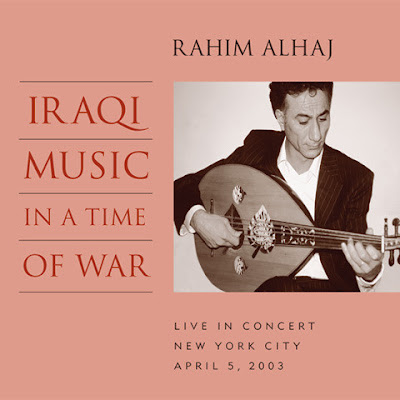 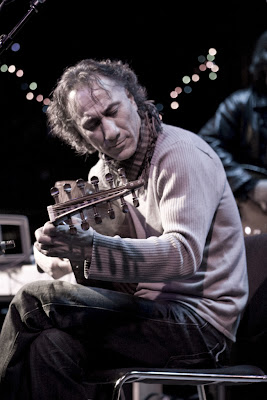 Album :
Iraqi Music in a Time of War الـمـوسـيـقـى الـعـراقـيـة فـي وقـت الـحـرب
Live In Concert. New York City. April 5, 2003
حفلة موسيقية. مدينة نيويورك. 5 أبريل 2003
♪
Artist :
Rahim Alhaj رحــيــم الــحــاج
♪
Note :
"This was the moment when a very alternative voice, Iraqi oud virtuoso Rahim AlHaj, living in exile since the 1991 Gulf War, came to visit New York City and to present a concert at Sufi Books. In his words of introduction, Rahim told us that his music is about compassion, love and peace. And then he made audible just what he meant, musically inviting us into his stories, his pain, his hope, his soul.. And along with his music, with its subtle dialogue of Eastern and Western sounds, we heard something else quite special to the moment: the powerful introductions Rahim spoke to each piece. I taped the concert just to give Rahim a souvenir of his visit. But as the invasion and occupation marched on, each listening told us that this performance must circulate, must enter recorded history and witness to the power of Iraqi music in a time of war..My strongest memory from our New York time together is of the feeling that moved through the room as Rahim played for us that night, comforting our upset and laying bare his own. Listen again now to this intensely war-torn moment, and imagine, in solidarity with Rahim, how music can advocate for compassion, love and peace." Steven Feld, Ethnomusicologist.."When I arrived in New York, I was witnessing Iraq's third war during my lifetime. But this time the war was very different for me; I was not there with my family, and I had no news from them. Yet day to day life for me was as excruciating as if I was in Baghdad. So I wanted to communicate to my audience my experience of war, the pain and misery one feels in a hopeless situation where chaos reigns and loved ones die. I found New York a bustling city, but when I was there I did not see people smiling. I sense that my audience that night felt the despair that I was feeling, and when we came together, it was a catharsis..To play music in a time of war is to connect, to feed people with hope, and to hold onto my hope of someday seeing my mother's beautiful face once again. Her last words to me were: "I hope your cruise missles don't kills me before I see you again." Music joins people in their souls, and when this connection happens, peace, love, and compassion can fill the hands of humanity." Rahim Alhaj
♪
Index :
http://www.rahimalhaj.com/
♪
Language : Instrumental - English "War Stories"
♪
Country : Iraq
♪
Melodies :
[.01.] Introduction • [.02.] The Second Baghdad • [.03.] Introduction • [.04.] Dance of the Palms • [.05.] Introduction • [.06.] Dream • [.07.] Introduction • [.08.] Sunset of the City • [.09.] Introduction • [.10.] Missing • [.11.] Introduction • [.12.] Iraqi Faces • [.13.] Introduction • [.14.] Yearning • [.15.] Introduction • [.16.] Horses • [.17.] Introduction • [.18.] Eastern Love
.
♪
╔══╗
♪♪
║██║
║♪♪║♥ ♪ Download From Here. [161 Mo] ♪
╚══╝
♪
.
‹ N/L : 737 ›
Posted by Abdel at 22:07:00