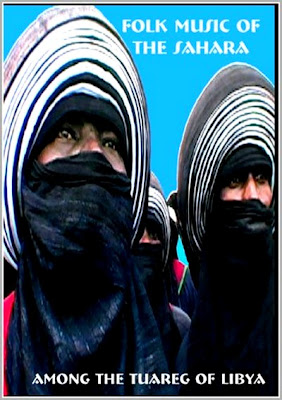 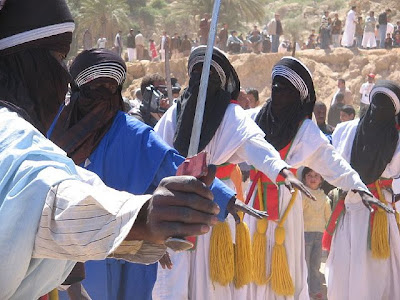 Album DVD :
Folk Music of the Sahara: Among the Tuareg of Libya
الـمــوســيــقــى الــشــعــبــيــة فــي الــصــحــراء : الــطــوارق فــي لـيــبــيــا
♪
Director :
Hisham Mayet هـــشـــام مــيــّـت
♪
Released : 2004
♪
Index :
http://en.wikipedia.org/wiki/Tuareg_people
♪
Note :
This is the third DVD released on Alan Bishop's Sublime Frequencies imprint, and it offers a rare glimpse at the traditional music and ceremonies of the Tuareg people of Libya. The Tuareg are an ancient desert-dwelling people who have never been subsumed into the Arab/Muslim majority of the rest of the Middle East. The Tuareg are a rare example of a matriarchal society, where the women are the custodians of tradition, folklore and music. In Tuareg society, the women remain uncovered and it is the men who must veil themselves at all times. The women, therefore dress in extravagant clothes - colorful printed silks and lovely jewelry - as they are the visual focus of Tuareg society. Photographer Hisham Mayet captures these absolutely gorgeous people in a fascinating free-form series of musical rituals. As with all of Sublime Frequencies' other releases, there is a minimum of intrusion or editorializing in this document - just a barely-edited digital video portrait of an indigenous people and their rarely heard traditional music. Their music uses similar instruments, and has the same trancelike polyrhythms that will be familiar to those who have listened to The Master Musicians of Jajouka, but the tone is slightly less devotional, more socially oriented. There is a lovely scene of young girls inside their private chambers singing in the round, effortlessly playing complex, off-kilter rhythms wholly unfamiliar to Western ears. The mysterious cloaked Targi (male Tuareg) ride their camels across the barren Saharan desert, and in one scene, perform a traditional synchronized sabre dance to the music played by the women. In another scene, a mass of stunning Libyan women sit and listen to the emotional folk stylings of an Arabic artist from the North. Folk Music of the Sahara: Among the Tuareg of Libya is a truly beguiling release, and an important view of what will be lost if the West ever achieves its goals. After the United States government is through leveling the Middle East to a pile of useless rubble and installing oppressive, dictatorial governments that will hasten the spread of Western industrialization and commercialization into these untouched regions, cultures like the Tuareg might be lost forever, reduced to a footnote in historical accounts. At least we'll have this DVD as a consolation prize, and we can all try to remember what once was
.
♪
╔══╗
♪♪
║██║
║♪♪║♥ ♪ Download From Here. [460 Mo] ♪
╚══╝
♪
.
Posted by Abdel at 17:54:00