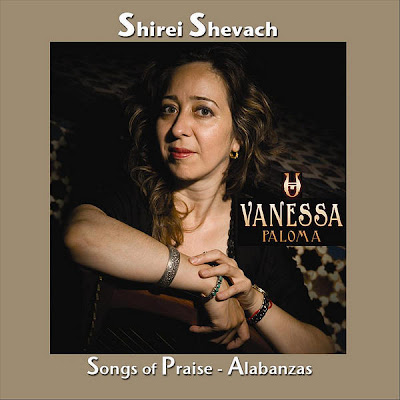 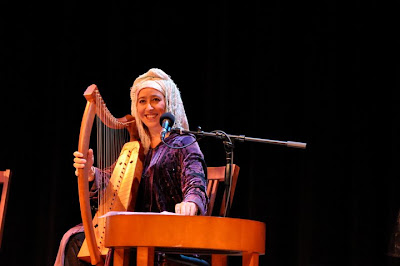 Album :
Shirei Shevach - تــراتــيــل الــمـــدحSongs of Praise - Alabanzas
♪
Artist :
Vanessa Paloma فــانـيــسـا بــالــومــا
♪
Index :
http://www.facebook.com/profile.php?id=587697878
http://es.wikipedia.org/wiki/Alabanza_(religión)
♪
Genre : Spiritual, Vocal, Religious
♪
Language : Hebrew - Spanish - Judeo-Spanish - Judeo - English
♪
Country : Morocco
♪
Melodies :
[.01.] ¿Por qué no cantáis la bella? Why don’t you sing, Oh beautiful one?:This Romance found in Tetouan and Oran can be interpreted as a woman’s declaration of love to her beloved or as a metaphor for the Shechina in exile, in the tower, declaring her love for our souls and fighting to release our souls from the bondage of the war of daily life. In 2006, during a concert I gave this possible option of interpretation; by the end of the song a woman from Crypto-Jewish background who was starting to find her way back to Judaism had tears streaming down her face. She exclaimed “Yes, it’s the Shechina, fighting for all of us who are in bondage since times of the Inquisition!” • [.02.] Al Tira Avdi Ya’akov – Don’t be Afraid my Devoted Jacob: This song is sung after Havdala. At the moment of transition after our soul is separated from the holiness of Shabbat and re-enters into the week, we need songs, food and light to ease us back into the potential harshness that awaits. I wrote this tune one such Saturday night and sing it very often • [.03.] Psalm 23In the summer of 2000 I was musical director and composer of an orthodox girl’s performing conservatory. One of the vignettes that was performed told the story of the Moroccan girl who became a Tsaddeket (Jewish saint): Lalla Sulika. In the play, while she was in jail, expecting to be beheaded for denying conversion to Islam, she sang this psalm to give her strength. I composed the melody as a young girl’s devotional improvisation • [.04.] Avram Avinu –Avram our father:This is probably the most well-known song in Ladino. What people do not know is that it is originally a song to celebrate the circumcision ceremony. Abraham was the first Jew, the first to declare the unity of God and to have a circumcision, even at an advanced age. While in Portugal in 2007 I decided to explore feelings and vocal range around this popular melody. After that, it has become my favorite way to sing this song because it tells the emotional journey he took, as well as the literal one • [.05.] Avdei Zeman – Slaves of Time:This short poem by Yehuda HaLevy is very timely for the world we live in. So many of us always feel trapped by time, instead of surrendering to the unity of the world we live in and realize that on occasion we must live outside of time. Time can be circular, linear, spiral… all according to how we experience it • [.06.] Vocalise:A wordless meditation and improvisation I did which is searching through the inner spaces of my voice: pushing, pulling, playing, crying and laughing. I enjoy singing with the Tibetan bowl drone. While in Nepal on a trekking trip in 2004 I sat one day for about an hour hearing Buddhist monks chant with these bowls, percussion and a larger-than-life horn. It is a very liberating exercise, to sit with a drone and play around it with one’s voice • [.07.] Laila Ohr – Night is Light:(lines 11-12 from Psalm 139)In our duality-obsessed world, this line from Psalms shows us that on a certain level darkness can be light. That which we perceive as bad or difficult is positive in the vision of the Creator. I wrote this song during the first weeks of the second Intifada in the fall of 2000, while in residence at Mishkan Omanim in Herzliya. We could hear the planes outside the window and see flares in the distance. Stress was palpable and it seemed we were surrounded by darkness. My mother and I were preparing “Seas of Change” for performances, and this piece was the culmination of the program, talking about the difficulties of migration that bring one to higher levels of depth, understanding and integration with oneself and others
.
♪
╔══╗
♪♪
║██║
║♪♪║♥ ♪ Download From Here. [90 Mo] ♪
╚══╝
♪
.
‹ N/L : 838›
Posted by Abdel at 22:47:00