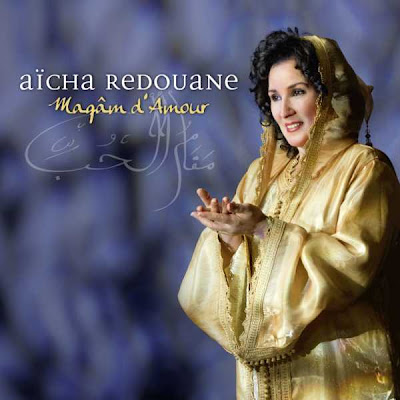 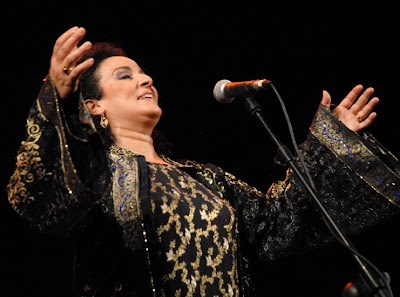 Album :
Maqâm d'amour مــقــام الــحــبّ
♪
Artist :
Aïcha Redouane عــائــشــة رضــوان
•» Aïcha Redouane: vocal, daff •» Habib Yammine: riqq & daff , vocal •» Salah El-Dine Mohamed: qânûn , vocal •» Nabil Abdemouleh: nây , daff, vocal •» Safwan Kenani: kamân (violin), daff, vocal
♪
Index :
http://www.aicharedouane-maqam.fr/
https://www.facebook.com/profile.php?id=100003278566731
https://www.facebook.com/profile.php?id=100000398612671
https://www.facebook.com/profile.php?id=741079612
♪
Note :
"The Diva of Arab song", "A voice of molten gold", "A vestal of Arab song", "All the perfumes of the Orient": so many different titles honour the voice and artistic talents of Aïcha Redouane, who continues to delight Arab and Western audiences as she has done since the 90s. Of Moroccan origin, but resident in France since her earliest childhood, Aïcha has sung in various styles (Berber, jazz-blues, Western and Arabic songs…) In the late 80s she abandoned architecture to devote herself to the musical tradition of the Arab maqãm, (plural maqãmãt), carving herself a place not only as a singer but also as a qãnun (zither) player, all by her own means. Her encounter with Habib Yammine was a major factor in her decision to specialise in the art of Arab song, poetry, composition and improvisation. The French Ministry of Culture awarded her a research grant.
The album "Maqãm d'amour" (Maqãm of Love) is based on pomes written by the Sufi saint named Rãbi’a Al-'Adawiyya. "Out of the stellar names of women whose intelligence and learning have left their mark on Arabo-Muslim history, her name was the one we chose. After a first show in Paris that was attended by a warm, receptive, and enthusiastic audience, and in tribute to this woman who devoted her whole life to Divine Love, several festivals and theatres kept a special place for it on their programme. Rãbi'a's words of Love are timeless; they are so forceful, so suave in the purity and light they emanate, they seem utterly modern and could have been said in the 21st century. Today, as in the 8th century, these poems offer a cure for all hearts that suffer, balm for spirits in search of illumination, a guiding star and appeasing force for all human beings, over and above any cultural, religious or other differences of opinion
♪
Language : Arabic - Vocal - Instrumental
♪
Country : Morocco - Palestine - Syria
♪
Melodies :
[.01.] Cheminement / Masîr Start• [.02.] Salut à Salmâ / Salâmun ' alâ Salmâ • [.03.] Souffle / Nafas • [.04.] Ma coupe, mon vin / Ka ' sî wa-khamrî • [.05.] Commensaux / Nudmân • [.06.] O aimé de mon coeur / Yâ habîb al-galb • [.07.] De deux amours je t'aime / Uhibbuka hubbazu • [.08.] Faible est ma provision / Wa zâdî galîlun • [.09.] Mon repos, ô frères / Râhatî yâ ikhwatî • [.10.] Oh, aie pitié / Wâ rahmatâ • [.11.] O majoie / Yâ surûrî
.
♪
╔══╗
♪♪
║██║
║♪♪║♥ ♪ Download From Here. [161 Mo] ♪
╚══╝
♪
.
‹ N/L : 691 ›
Posted by Abdel at 23:13:00