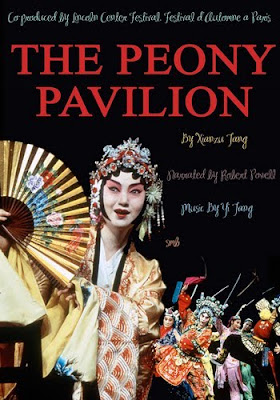 Album DVD :
The Peony Pavilion جــنـــاح الــفـــاوانـــيـــا
By Xianzu Tang
Co-produced by Lincoln Center Festival, Festival d'Automne à Paris
إنــتــاج مــشـــتـــرك بـيــن مــركـز لــيــنــكــولــن ، مــهــرجــان الـخــريــف فــي بــاريـــس
Music By Yi Tang, Narrated by Robert Powell
♪
Index :
http://folkmusicsmb.blogspot.com/2010/11/peony-pavilion-kunqu-chinese-classical.html
http://www.festival-automne.com/
♪
Language : Chinese
♪
Note :
This production of the epic Chinese opera The Peony Pavilion was a smash hit at New York's Lincoln Center Festival in 2000; at 19 hours long, however, it resists being released on video in its entirety. But this two-hour distillation (with narration by Robert Powell that bridges the gaps necessitated by such abridgment) is more than satisfactory, giving viewers a sense of the shape and the flow of the entire work. It also shows off this staging's sensationally colorful costumes and sets, along with the talented cast of actors and musicians, all under the direction of Chen Shi-Zheng, who brings off a near-miraculous dramatic and musical event. While the cumulative impact of such a lengthy dramatic work is inevitably lost, this string of "highlights" still manages the remarkable feat of developing both a narrative and characters worth spending time with.
At the center of the exquisite Chinese opera The Peony Pavilion is a romantic and poetic love story about a couple who encounter many obstacles, including parental opposition, invading Mongol hordes, and bungling comic servants. Intimate episodes alternate with elaborate set pieces, lyrical poetry with low slapstick comedy. This abridged version of the epic masterpiece from sixteenth-century dramatist Tang Xianzu is an all-embracing art form. Acting, singing, dance, acrobatics, stilt-walking, puppetry, recitation, pageantry, and martial arts all find a place in the rich tapestry of The Peony Pavilion
.
♪
╔══╗
♪♪
║██║
║♪♪║♥ ♪ Download From Here. [618 Mo] ♪
╚══╝
♪
.
Posted by Abdel at 16:18:00